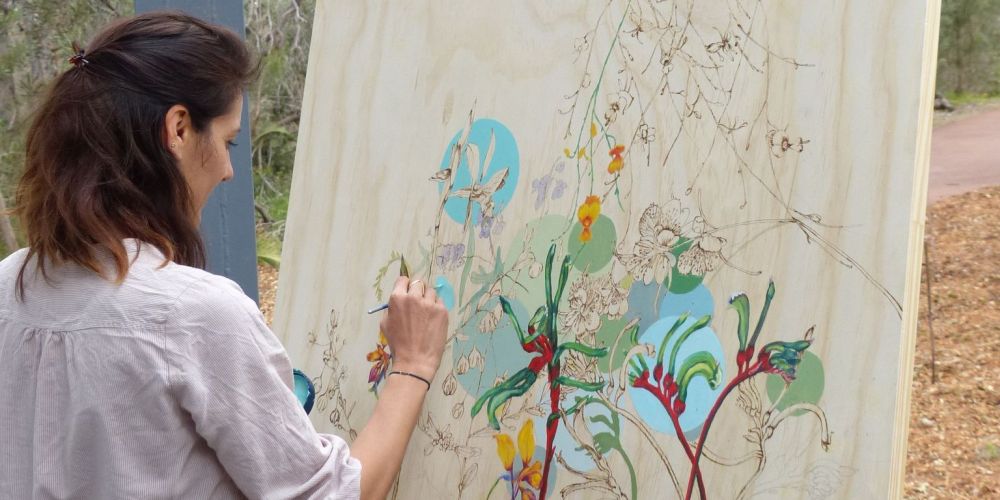 On 2 February 2017 local artist Vanessa Liebenberg will speak at the first gathering of the Murdoch Branch for the year.

Flora plays a major role in Vanessa’s work as an artist and textile designer. Since moving to Western Australia, she has been fascinated by the plant life and wildflowers of WA. Vanessa will discuss some of these influences and the influences of botanical artists on her work, as well as the process and media she uses.

Vanessa spoke recently with Viki Cramer about her art.

It all begins with burning the wood. Vanessa Liebenberg loves this phase of developing a new work. “I love wood, the feel of it, the ‘organic-ness’ of it, and when I’m burning into it it’s just got a beautiful look. I find the whole process really meditative. I can do that for hours.”

She works on specially made panels of wood veneer onto which she first makes a detailed drawing, burning out the wood with a pyrography pen.

Her works are then built up, layer upon layer, much like the native bushland that is home to the wildflowers and birds that tangle and flit through her paintings in a cycle of birth, death, rebirth and new beginnings.

“I’m originally a textile designer so I think that’s a big influence because textiles can be quite layered and, especially because I was a woven textile designer, I also did the construction of the fabric as well as the design.”

After burning the wood, Vanessa does separate detailed sketches with a calligraphy pen that are transferred onto silk screen and then screen-printed onto the panel. Then she begins to “pull it all together”, beginning with a layer of a medium that allows her to paint onto the wood.

“It’s a really complicated way of doing it,” she admits with a smile, “as now I have all this detail and then I have to sort of paint in between it with the medium, and then I have to paint it again with what I’m doing next, which is mostly acrylic [paint]. Then when everything is really dry I would do the last layer, which is the oil paint.”

Her technique of layering different media is an important part of how Vanessa creates her artworks. Developing this technique has been a gradual process. “I used to do mostly oil painting, mostly quite traditional detailed flowers and portraits, but then I think I got a little bit bored with that. I missed the textile design part and I wanted to add more layers. I missed drawing. I like all those different ways of creating – drawing, painting, printing – and I was thinking of a way of how to combine it into one piece. So gradually it evolved into that process.”

She likes the unexpectedness of where the process takes her. “I will have an idea in my head, but I won’t have a complete picture,” she says of the initial phase of creating a new work.

Vanessa draws inspiration and comfort from the resilience of nature; in how plants and animals endure and adapt to the changing environment around them with what she regards as quiet and joyful determination.

“You look at nature and it just goes on, it doesn’t matter what happens,” she says. Flowers grow in obscure places under the most difficult conditions. “It makes me think that I sometimes take life a bit too seriously, and then when I see that I feel comforted. I think it’s beautiful and soothing and calming, and filled with hope and possibilities.”

Hope and future possibilities, for humanity and for nature, are recurring themes in Vanessa’s work. Several of her paintings feature children surrounded by a kaleidoscope of flowers and birds. “I often think about children and how they’ve got this world of possibilities in front of them, of what can still happen and what they can achieve,” she says. She muses on that feeling of looking back on your own life, especially as you get older, and remembering just how exciting the world was when you were young, when you believed anything could happen.

Vanessa has painted and drawn since she was a child, and continued to do so even while working full-time as a textile designer. At times her obsession with painting has felt something of a curse. “It’s not an easy occupation, so sometimes I’ve thought why, why, why do I always feel this need to create something?” She laughs. “Can’t I just be a doctor? Why the struggle?”

The upside of her constant urge to create is that she is never bored. “I have a million things in my head that I want to do, but I just don’t have enough time.”

Since emigrating to Perth from Cape Town in 2007, Vanessa has developed a fascination for kangaroo paws and banksias.

“It doesn’t matter how many times I look at the kangaroo paw or the banksia, I just have this intense desire to draw it or to paint it. I think it’s the amazing form and colours, but mostly the form. I also love the eucalyptus trees, the shape of the leaves and the colours, and the way that they hang.”

The choice of which plants or birds she will incorporate into any particular piece is not a calculated decision. “I see something beautiful and I want to recreate it” she says.

Vanessa provides sound advice to budding botanical artists about how to approach such complex floral forms. “When I paint or draw anything, I don’t look at and see ‘this is a flower that I’m going to draw’, I look at it as shapes and light and dark; as shadows and light. And if you do that and you really look at what you’re seeing – the shadows, the light – you can draw anything.”

“If you practice” she adds.

All artworks are by Vanessa Liebenberg and are reproduced with her permission. You can see more of Vanessa’s art on her website.

This is a group which meets in a self learning environment. Various aids, such as Florabase, books and keys are […]