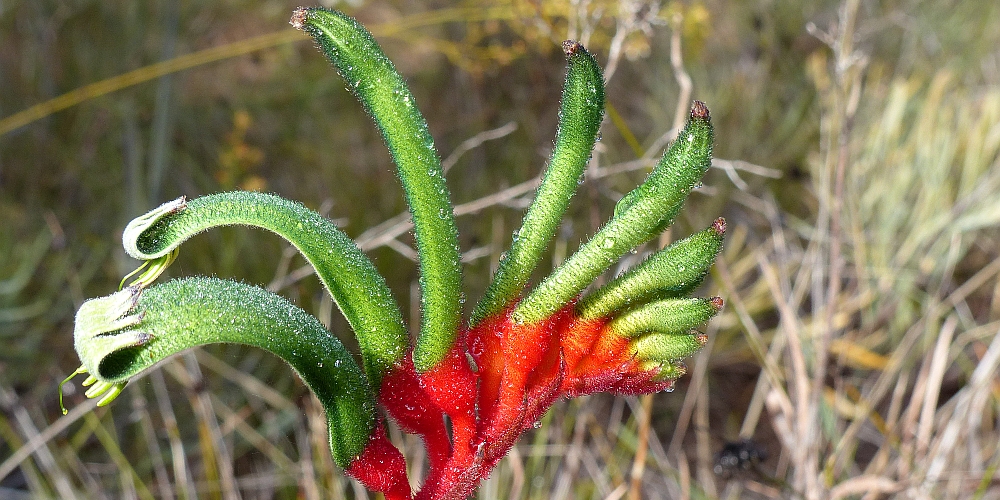 I’m sure that you’re all familiar with our State floral emblem, the unique Red-and-Green (or Mangles’) Kangaroo Paw (Anigozanthos manglesii). Quite rightly, it’s a popular addition to native gardens right around Australia and, of course, can be found growing naturally across wide areas of southwestern WA. But there are more ‘kangaroo paws’ than just the familiar Mangles’ and the popular hybrids produced for gardens by the boffins at Kings Park. Did you know that there are actually 11 species (and 13 recognised subs-species) of Kangaroo Paw in the genus Anigozanthos? No? How about the fact that there is one species that has a genus all to itself? Read on if you’d like to learn more about this fascinating group -and who wouldn’t?

But first, a short (but interesting!) history lesson…

The genus Anigozanthos, to which all but one species of Kangaroo Paw belong, was first described by Jacques-Julien Houtou de Labillardière in 1798. Monsieur Labillardière (below) was naturalist aboard d’Entrecasteaux’s ship Espérance during its expedition to Australia in 1791-94.

In December 1792, they stopped to undertake repairs near modern Esperance, where he discovered Anigozanthos rufus (of which more anon). Unfortunately, whilst Labillardière described A. rufus, he didn’t explain the origin of the genus name. The modern consensus is that it comes from Greek anisos (unequal) and anthos (flower), describing the unequal lobes of the perianth.

…and a botanical diversion

The genus Anigozanthos is a member of the Haemodoraceae (or ‘Bloodroot’) family, which characteristically have unusual chemicals that give the roots of many species a reddish-orange colour. There are 14 genera and 103 species of Haemodoraceae, mainly in the southern hemisphere.  In WA, there are eight genera, of which six are endemic: 1) Anigozanthos,  2) Blancoa, 3) Conostylis, 4)  Haemodorum, 5) Macropidia, 6) Phlebocarya, 7) Tribonanthes, 8) Wachendorfia – introduced from South Africa.

And now…. the genus Anigozanthos

Anigozanthos is endemic to WA, where there are 11 species and 13 recognised sub-species. All are recognisable by their distinctive inflorescences (flower-heads) and are found through-out the south-west from Kalbarri to east of Esperance. They have been known as ‘Kangaroo Paws’ since the 1850s – but were originally called a ‘Kangaroo Foot’! Smaller species, that aren’t red and green, are now referred to as ‘catspaws’. Anigozanthus is closely related to the genus Macropidia (the’ Black Kangaroo Paw’), which now has its own monotypic genus.

Our Cast (in order of appearance)

•       Common from Shark Bay to Scott River and Mt Barker

•       Found from Kalbarri to Dunsborough to Hopetoun

•  From Moora to Nannup and Albany to Esperance.

•  Found in sandy depressions and locations that are waterlogged in winter.

•  The first Anigozanthos species to be described.

•  Found in heath and open  mallee from the Stirling Range to Israelite Bay.

•  Restricted to an area within 50 km of Albany

•  Common from Gingin to Arrowsmith River, up to 100 km inland.

Roz is an ecologist with a breadth of fungi knowledge and talk will cover some of the fascinating partnerships between fungi and other organisms in our amazing Biodiverse part of the planet including:
:: Quenda and truffles, rejuvenating bushlands
:: Terrestrial orchids and fungi
:: Tree hollows, birds, insects and fungi.

The late Arthur Blundell, together with a number of EHB members, organised a survey of Morangup Nature Reserve, east of […]