What’s so special about hakeas? 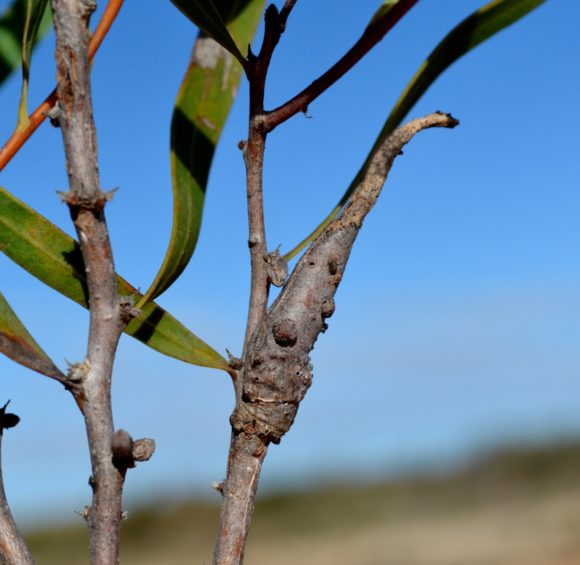 Hakea stenocarpa shows its bizarre fruits that look like a branchlet even appearing to have buds on its stem.

There are about 170 species of Hakea, with 96 species restricted to southwestern Australia that occupies only 5% of the Australian continent. They are sister to Grevillea with over 350 species with most of these also in southwestern Australia. The genus is renowned for having the toughest and spiniest leaves, and the woodiest fruits, in the world! But its flowers are charming and species are either insect- or bird-pollinated. Many bird-pollinated species contain cyanide in their flowers (but not in their nectar) that is believed to deter cockatoos and emus from eating them. Just as the flowers of bird-pollinated species are exposed to florivores so too are their fruits exposed to cockatoos that relish the seeds of hakeas. Thus, bird-pollinated species also have the largest and woodiest fruits that deter cockatoos from getting at the seeds. The insect-pollinated species have small flowers embedded among the spiny foliage and often produce small fruits that remain green and often mimic the leaves. Almost all Hakea require fire, actually anything that causes death of the supporting branch, to stimulate seed release from the woody follicles (they are not woody in Grevillea). All seeds are winged and wind-dispersed (Grevillea are ant-dispersed). The large cotyledons of the seedlings are packed with nutrients and these help the seedling to develop a strong root system that increases the chance of surviving the summer-autumn drought.

Profile: Byron Lamont is Professor Emeritus in Plant Ecology at Curtin University. He has two doctorates and was made a Member of the Order of Australia (AM) in 2010 for his research and teaching on the Australian flora. He was co-author of a book in 2015 on the “Plant life of Southwestern Australia: Adaptations for Survival” that can be downloaded free from de Gruyter Open.