Andrew Brown will be well know to most members through his superb orchid and eremophila books.  He will talk tonight about one of his favorite orchid hunting grounds. Andrew says:

“As you travel eastwards from Hyden to the Lake Johnston-Balladonia area, rainfall drops dramatically and the further east you go the more intermittent and unreliable it becomes.  This is not ideal for native orchids and means that, over much of this area, only the hardiest species can survive.  However, there are places that provide habitat niches for orchids.  These are the granite outcrops which capture the often meager rainfall in soil pockets and run-off areas and enable 41 orchid species to flourish.  In this talk, I will cover six of my favorite eastern granite outcrops, found between Lake Johnston and Balladonia, and talk about the orchids that grow on there.”

Since Europeans first came here, Western Australia’s astonishing biodiversity has inspired many people to collect and preserve specimens for study. William Dampier, an English privateer collecting at Shark Bay, commented on how many blue plants there were. Unfortunately many of his specimens were lost in a shipwreck, but later collectors were not so unfortunate. Alex George will be familiar to most Wildflower Society members. An eminent taxonomist and prolific author, he has published not only on botany, but also on historical topics, and even a textbook on botanical Latin! This talk should give some illuminating and little-known facts about people who, like us, were fascinated by our flora.

Tarin Rock, a Nature and a Water Reserve in the southern Wheatbelt located between Dumbleyung and Lake Grace, is an oasis of native flora surrounded by farmland. The reserves are very rich in native flora (over 300 species recorded for Tarin Rock Nature Reserve alone) of which many are listed as threatened and priority species for conservation. Jolanda Keeble has taken an interest in these reserves with the intent of producing a book on the flora to provide information to local landholders and visitors to the area, and to provide the Department of Biodiversity, Conservation and Attractions with additional flora information to guide the management of the nature reserve. She will provide an overview of her project and findings of the systematic surveys she has carried out over the last 2 ½ years. Jolanda came to WA from the UK in 2004. She holds degrees in both Botany and Zoology and a Masters in Ecology. In WA she has worked in the oil and gas industry, and also as a tour guide to remote sites. She is also active in the Wildflower Society and The Naturalists’ Club.

Local member Stephen Lenghaus will share his recent trip along the Canning Stock Route. Stephen is an avid wildflower enthusiast and photographer.

Hazel Dempster , from the Society’s Northern Suburbs Branch, will be talking about Red Trees at Anthill Farm – a wheat farm near Geraldton that has an explosion of colour after good rains in both virgin and re-claimed bushlands.

Hazel first discovered Ant Hill Farm when she had an invite from, Jane the owner of the farm, after she enquired about a plant she had never seen before when she was taking a load of wheat to the Yuna Silos. She called it a “Top Hat plant” (Verticordia oculata). Later she took a piece to Geraldton with her to show a friend, Jenna Brooker. Jenna recognized it as the same as the plant on the front cover of Elizabeth’s book. 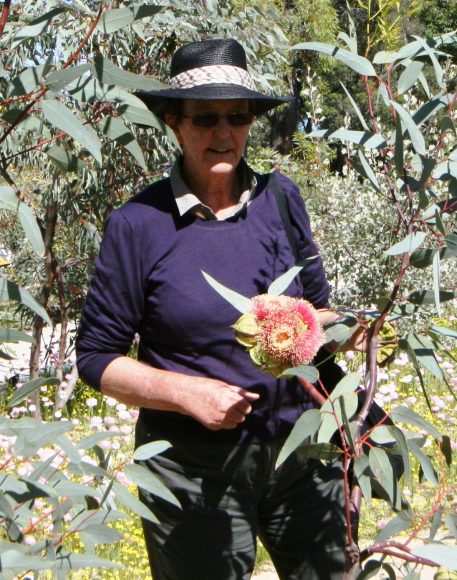 Kevin Thiele: Taxonomy and the documentation of Australia’s biodiversity

Kevin Thiele is the Director of Taxonomy Australia, an organisation established to promote and advocate for the discovery and documentation of all of Australia’s species and is also the President of the Wildflower Society of Western Australia. He is a plant taxonomist with a keen interest both in species discovery (he’s discovered and named more than 40 new species, many in Western Australia) and in bringing a better understanding of taxonomy and biodiversity to a wide audience.

Guest Speaker: Eddy Wajon on "A Year at Hyden". Meeting includes sales of native plants, a plant identification session and […]