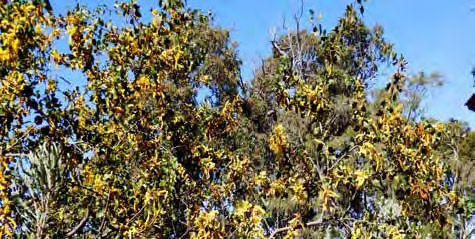 Among the hundreds of species of Acacia, Acacia denticulosa, Sandpaper Wattle, is one of the most striking. The species was first collected near Mt Churchman by Jesse Young, a member of Ernest Giles’ expedition across the Great Victoria Desert in 1875. Young (1852–1909) was the astronomer and principal plant collector (assisted by William Tietkens). With the consent of Thomas Elder, sponsor of the expedition, he passed his specimens to Ferdinand Mueller, Government Botanist of Victoria (remember, there was no botanist in WA then). The collection totalled about 400 species, of which some 63 were new. Mueller named many of these, including this species, published in 1876. The name refers to the toothed margins of the phyllodes but perhaps the more unusual feature of these is the very rough surface from which the common name is derived. This is due to short, conical outgrowths with gland-like tips that are scattered over the lamina and edges of the phyllodes. The phyllodes and young branchlets (also rough at this stage) are slightly sticky.

In the wild the plant is a shrub up to 4 m tall (bottom left) but in the garden it grows to 6 m and can spread to 8 m wide (bottom left). It has an open, rather ungainly habit. Its bark is almost smooth, pale greyish brown, or brown when wet (bottom right). In full flower the tree appears covered with large, golden, woolly caterpillars (centre left).

I bought my plant as a small seedling in April 2008. It grew quickly and by August 2010 was already 3 metres tall.  Since 2010 it has flowered well, starting in July and continuing to the end of August. One reason for its colourful show is that it usually has several spikes per axil. They have a faint ‘wattle’ scent. The fruit is relatively inconspicuous, being a narrow, undulating pod up to 7.5 cm long and 3–4 mm wide, holding small, dark brown shiny seeds (centre right).

The species has no close relatives. The plant has no lignotuber, hence is killed by fire and regenerates from seed. Given adequate space it does not require pruning.  Should this be necessary it should be done progressively as the plant grows, never cutting below the foliage.

Sandpaper Wattle is rare in the wild, known mainly from granite outcrops from near Mt Churchman south-east to Nungarin, with a record near Wongan Hills. It is a Declared Rare Flora (Threatened). Like another rare species from granite rocks, Eucalyptus caesia, it is proving amenable to cultivation.  A plant in the garden of the previous WA Herbarium grew to a large size. Would you like to learn how to tell one plant from another? Join us for this basic plant identification workshop to […]

On Tuesday 11 August the Perth Branch will be holding our General Meeting at the Subiaco Community Centre. Doors open […]